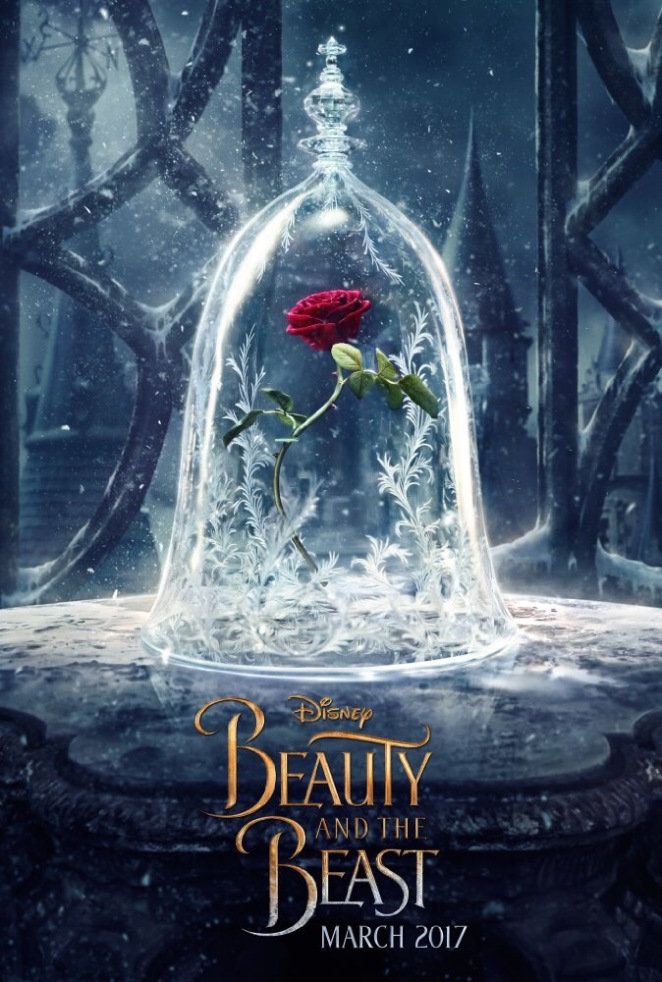 Highly anticipated, this live-action adaptation of the 1991 classic had a lot to live up to. For an example of the impact that film had, here’s a quote from my review of Moana.

“In 1991, I saw Disney’s Beauty and the Beast and it was the first step in my developing love of movies. The animation, the emotional resonance of the story, the music and the characters opened my eyes to the idea that animation is not just kids stuff. These aren’t kids movies. They are films same as anything else.”

This newest film version had 2 tasks that it needed to accomplish. The first was clearly appeal to the nostalgia of the people who had the opportunity to see the original, animated film. The second is to basically justify its existence, because like most remakes of great films, no one asked for it. Well I’m happy to say that the 2017 version of Beauty and the Beast manages to accomplish both. 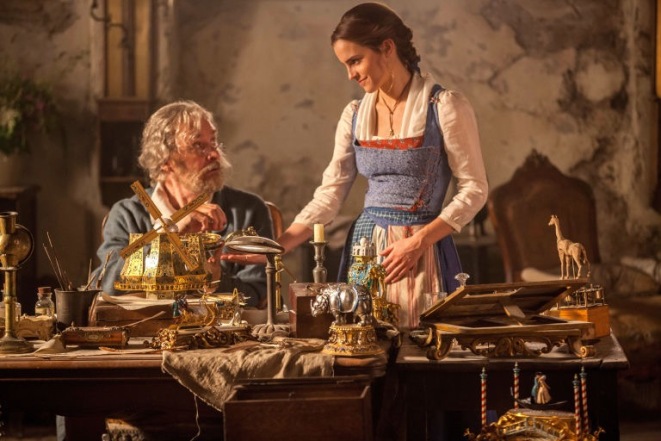 Bill Condon is in the director’s chair for this one. Condon is certainly qualified to helm this material. He wrote and directed another movie musical that is a personal favorite of mine, Dreamgirls. He also wrote the screenplay for the film version of the musical Chicago and directed films in the Twilight Saga.

The animated film worked as both a cinematic and theatrical experience due to the fantastic work of the late Howard Ashman. This film would have to retain the impact of the original while differentiating itself. I believe this was accomplished by making this film more theatrical in terms of a stage experience than a cinematic one. I don’t see this as a negative however. I liked it because it gave a theatre experience even if you haven’t seen the stage show (I have seen it and it’s great).

There are so many elements to break down here. So I’ll take it piece by piece.

I enjoyed the casting choices made for this. Everyone excelled in their performance of the characters. Emma Watson gives us a very independent yet quaint performance to Belle. The only thing I was a huge fan of was her singing. It’s good, yet It sounded like her vocals were played to not dip into her singing weaknesses as opposed to strengths. I do admit however that this is the first time I’ve heard Watson sing. So I clearly may be wrong on this.

There were 2 performances that surprised me. The first was Dan Stevens as The Beast. I am not familiar with this actor, but I felt more of a sense of guilt from the Beast than even in the original. The other is Josh Gad as LeFou. Previously he was just Gaston’s bumbling sidekick, yet here he’s portrayed as a man who may not be totally on the side of the man he calls his friend.

One additional thing I loved that this film did was add little details or backstories to the characters. We are treated to additional elements that shaped the why our 2 main characters are who they are.

The supporting class is rounded out by some notable acting veterans. Ewan McGregor, Ian McKellan and Emma Thompson give their own special flair to the characters of Lumiere, Cogsworth and Mrs. Potts. We also have a treat by Kevin Kline giving us a pretty dignified take on Belle’s father Maurice. And of course we mustn’t forget Luke Evans playing one of the boorist of boorish characters in Gaston.

Alan Menken returns to score the film. His work here has a far more grandiose flair than the animated film. It feels much more like a stage show in that regard. I felt it has come full circle. Ashman’s lyrics gave the original its heart and here it’s Menken’s score. If you get the soundtrack just listen to his overture and you’ll know what you are in for. 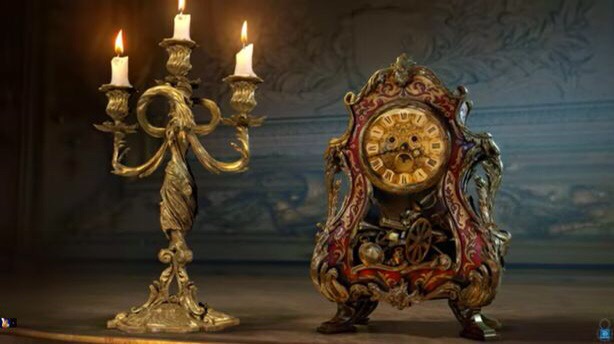 The animated felt like you were seeing this story unfold across stained glass windows. After all it was part of the prologue. Now the film feels like a series of paintings. Beautiful and vibrant colors highlight even the darkest of setting like the Beast’s castle. The lightning really give prominence to the costuming which is exquisite. Especially in the ballroom scene.

Was this adaptation of the fairy tale needed? I would say no becuase the original animated film is pretty much perfect in my eyes. Yet to see it realized again for cinema is certainly an achievement to commend. We got a more theatrical experience to take in this story. Beauty and the Beast may hit the exact same notes, but it’s difference in presentation make this one of the few remakes that’s earned it’s place on its own merit and not just in conversation with its predecessor. 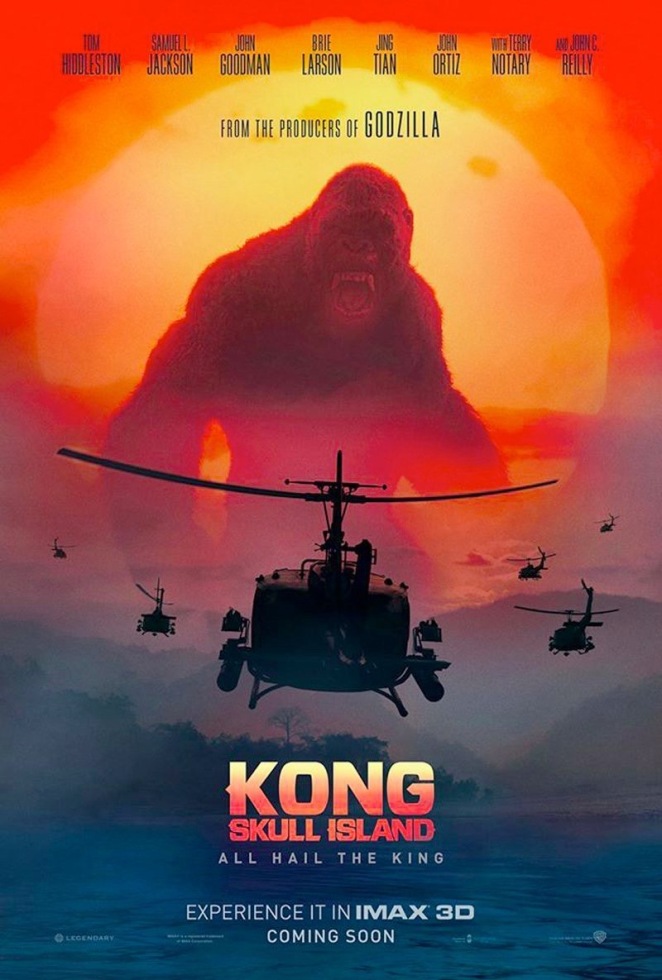 Kong: Skull Island is the second film in the developing MonsterVerse by Warner Bros. The first entry was 2014’s Godzilla.

The film takes place right at the end of the war in Vietnam. Monarch agent Bill Randa (John Goodman) hires former British Special Air Service member James Conrad (Tom Hiddleston) to help with mapping out a location called Skull Island. After their helicopter convoy crashes on the island, the crew must survive against not only Kong, the king of Skull Island, but the many creatures that reside there. 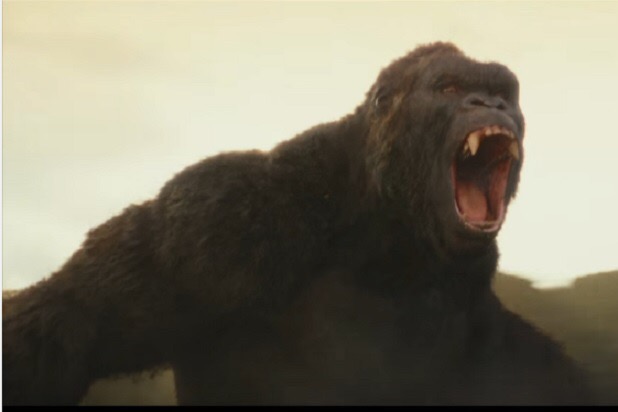 I quite enjoyed Kong: Skull Island. It’s a different beast (pun intended) than Gareth Edwards 2014 Godzilla. That film focused more on the impact of the kaiju from the human perspective. Kong: Skull Island is a well made pulpy, b-movie throwback.

The movie wastes no time getting into the action. If you’ve seen previous King Kong films, you know it usually takes a good third of the film before Kong appears. For me this was a welcome change of pace. For others, this may hamper the film as there isn’t really much of a buildup.

I enjoyed the cast for the film. Pretty much everyone fits into stock character roles yet everyone gets a fair share of screentime. The cast is rounded out by Oscar Winner Brie Larson as a photojournalist, Samuel L. Jackson as a soldier not ready to step away from war. John C. Reilly as a soldier from World War 2 stranded on Skull Island. We also get a reunion of Jason Mitchell and Corey Hawkins from Straight Outta Compton. 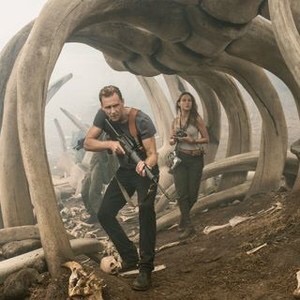 The action is well filmed and the effects look fantastic. There is some beautiful scenery amidst the chaos that is occurring. Director Jordan Vogt-Roberts has a handle on this material and moves the dial to a cheesy, good adventure as opposed to a cheesy bad one. It’s running time is just under 2 hours and every minute felt well used. 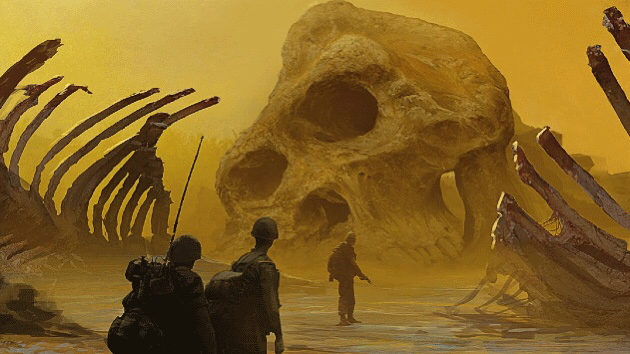 Kong: Skull Island is an entertains jaunt that has its feet firmly planted in its b-movie roots and utilizes what works for it to best. The visuals are really good and each member of the cast works from the leads to the supporting cast. This is a prime example of blockbuster filmmaking. 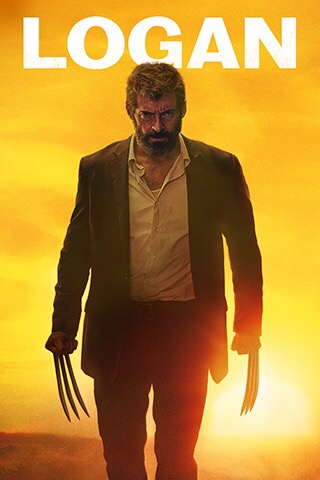 There is a scene halfway through James Mangold’s Logan that has the main character trio of Logan, Charles Xavier and Laura (Hugh Jackman, Patrick Stewart and Dafne Keen respectively) sitting at a dinner table. A moment’s peace from the hell they have been going through for most of the film. It is moments like these sprinkled throughout the bloody action that make Logan a shining example of what films based on comic books can be. 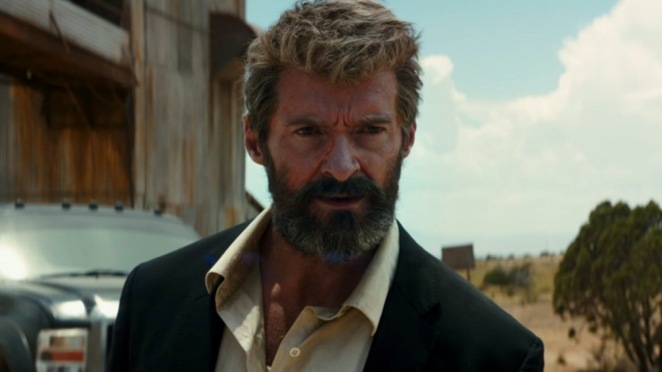 Logan is the tenth film in the X-Men film series as well as the third and final film of the Wolverine trilogy. It also marks the final performance for Hugh Jackman as Wolverine, a role he has played since 2000. And what a find send-off his character gets in this film.

The film takes place in the year 2029. Mutants are almost extinct as no new ones have been born in over 20 years. Logan is past his prime. His mutant healing factor is becoming less effective with each injury he sustains. He works as a limo driver while driving across borders to care for his old mentor Charles Xavier. After the arrival of agents of the Transigen Project, Logan is thrust into one final stand as he must protect a young Mutant named Laura. Now the former X-Man embarks on a cross country excursion that is more than a simple mission.

As a film Logan has a lot more going for it than it does against it. One thing that I enjoyed about it was the blending of genres. This is not a superhero film on par with previous X-Men installments. This is modern western with superhero characters. It has much more in common in terms of tonal presentation with a film such as Hell or High Water than it does with X-Men: Apocalyspe. Gamers will also take note of its similarities to the title The Last of Us. This decision allows director Mangold (who also helmed 2013’s The Wolverine which I loved as well), to tell the story that needs to be told.

The main trio is superb in their roles. It might be easy to praise Jackman considering he’s played the role for almost 20 years. Yet he brings such a weight of regret to the character that we haven’t seen before. In the previous films he’s tried to remember who he is. By the time the events of Logan come around, he’s questioning his whole purpose. He feels his body giving out and he just wants to get away from a life that he now feels had no meaning. 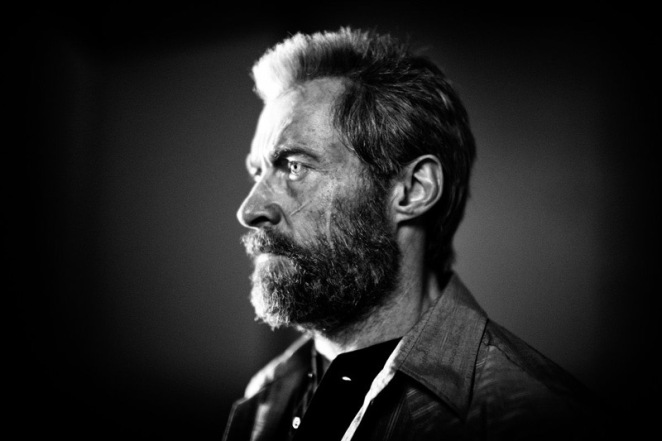 Patrick Stewart also reinvigorates his role as Charles Xavier. Now losing his mind to a degenerative brain disease, Charles relishes what time he has left and longs for Logan to for once take some joy in his life and be proud of what he has accomplished. Another positive is Stephen Merchant as Caliban. He brings a nuanced perspective that balances the hopeful Xavier and the cynical Logan. 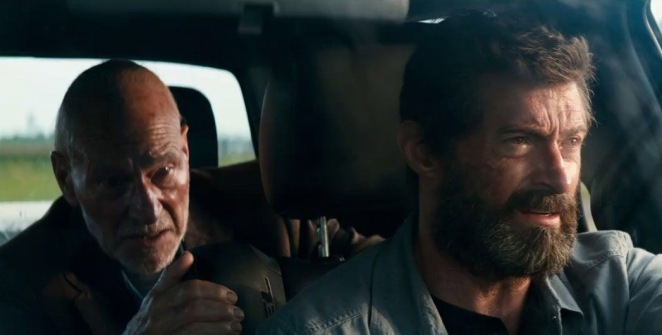 Last but not least, is Dafne Keen as Laura/X23. It was very refreshing to see Mangold not present her in the role of the precocious child sidekick. Instead Keen shows quite the acting range despite not speaking for a majority of the film. Her facial expressions and body language say everything you need to know about her.

Even though I’m praising the film, it isn’t perfect. The final third of the film is a little weaker than the rest. The shift is sort of similar to Mad Max Beyond Thunderdome. If you’ve seen that film you should understand what I mean. The film introduces an element that I felt Logan wasn’t as strongly connected to. The scenes work, yet the emotional building that had worked up during the film was sort of restarted at that point. Another weak point is the antagonists. Boyd Holbrook as Donald Pierce is charming, but Transigen as a whole is nothing impressive from a writing standpoint. I would venture to say that they are simply a vehicle to move the story along. The real villain of the story is Logan’s regret and doubt.

One thing I keep hearing is how Logan “transcends the superhero genre.” I don’t think that’s true. It’s a great film,  but what it is is it’s own film. It doesn’t fit into those standard conventions because it’s not trying to tell that story. This is something that I look forward to in regards to seeing some of these characters brought to the screen. Crossing genre lines. Mangold had a slight grasp on this with The Wolverine.

Logan is a great film. It is emotionally gripping and contains some great action. We see the final chapter in the life of a man question was it worth it?  A film that achieves a balance of visceral action and heartfelt character moments. 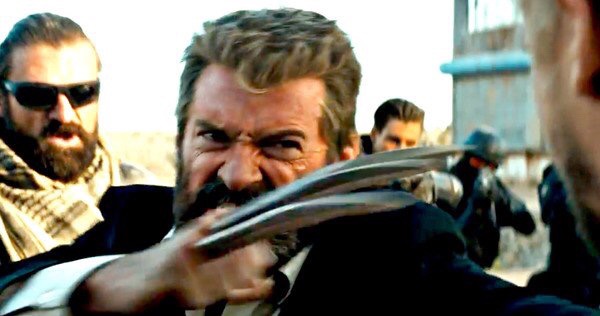