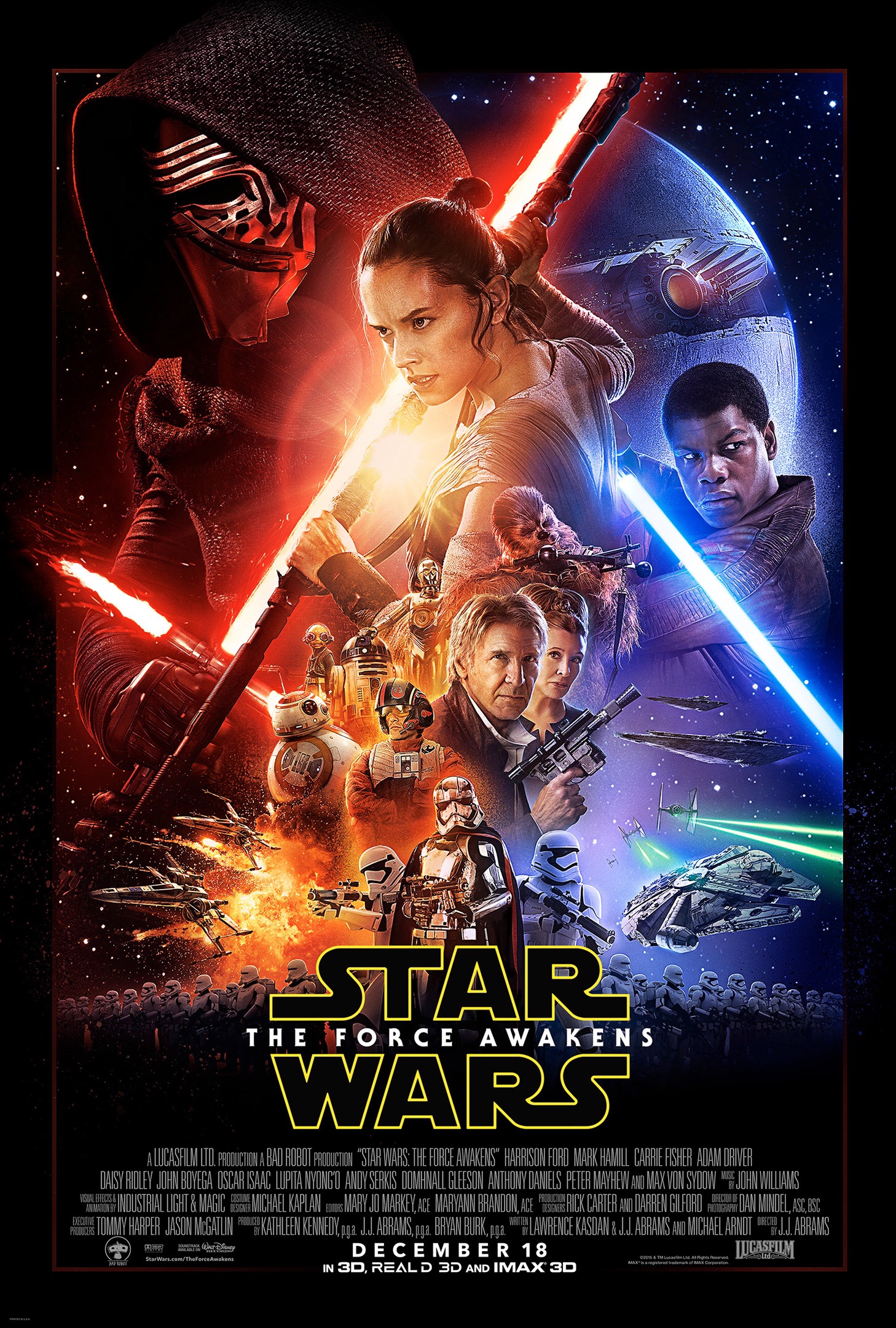 After a decade long hiatus the Star Wars saga returned to theaters on December 18, 2015. The last film released in the series, 2005’s Revenge of the Sith was the capstone on the prequel trilogy which left a bad taste in the mouths of most moviegoers. I personally do not dislike those movies, but they certainly were not up to the level of the original trilogy. Now we get a new story with new faces and some old ones as well. I will stay away from a rundown of the plot to avoid spoilers but honestly the plot itself doesn’t matter, it’s our characters that do in this case.

We meet Rey as a scavenger on Jakku. She is totally self-sufficient and can handle herself. Daisy Ridley really inhabits the role with such a determination and it’s great to see her story begin. 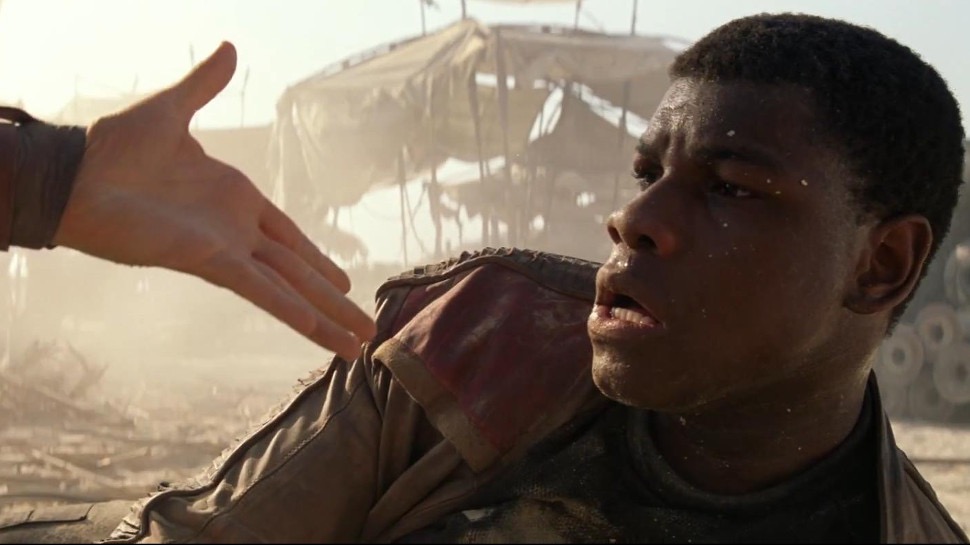 For me, Finn was my favorite character of the movie. His reactions, his timing all felt genuine and what a person in his situation would do. So excited his role in the future. 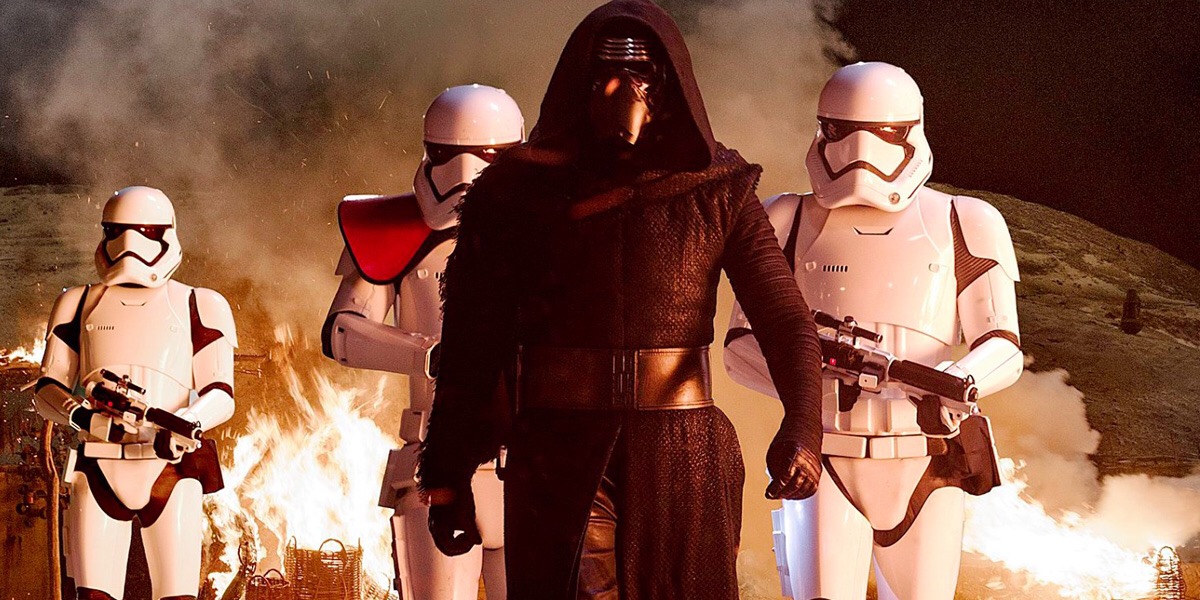 The film’s antagonist is as fierce as he is mysterious and a genuine threat. I’ll say no more from this point on, but he was a highlight. I loved Adam Driver’s voice both in and out of the mask.

Yea I know. How does the droid make the highlight list? By way of the fact that the crew was able to get genuine emotion out of him without having a mouthpiece as C-3PO was for R2-D2.

I also have to mention Oscar Issac’s Poe Dameron who is the best pilot in the Resistence and he certainly shows it. I look forward to more from him in the future.

The Force Awakens is a Star Wars movie to the very core. It invokes the feels that audiences had with the original back in 1977. The thrills, the feeling of adventure. It also tips its hat a few times in reference to the past. However here it feels legit because they were events that happened unlike in the recent Bond film “Spectre” where it felt a bit heavy-handed.

One of the things fans were looking forward to was the return of practical effects. The prequel trilogy was basically not too much but green screen. Now don’t get me wrong, this is 2015, there is CGI in this film, but it’s not at the forefront like in the past. It’s really understated and doesn’t make the film feel bloated. The film runs at a length of 135 minutes and never overstays it’s welcome once. I wanted it to keep going.

Unlike the prequels which were neither decently written or acted, the cast here is great and the writing is on point. People simply talk the way they normally would and there’s not a bit of wooden dialogue to be found. The characters run this story and what’s great about our two leads in Finn and Rey is that there is not a single moment that doesn’t advance their respective stories and neither character’s growth is sacrificed at the expense of the other. They get equal billing throughout.

The score is vintage John Williams. He captures once again the fantasy that we are wrapped up in.

And how could I not mention Han Solo himself, Harrison Ford? I love Ford as a movie star, but never really considered him very much of an actor with range. And while he was returning to a familiar role, he brought experience and leadership to Han. He’s far from the man Luke and Obi-Wan met in the Mos Eisley Cantina in A New Hope.

Star Wars: The Force Awakens is a love letter to its fans. JJ Abrams knew the franchise had to get some goodwill back with the fans and this was a great start. It takes a lot from A New Hope but since for me that is not only my favorite Star Wars film, but my favorite film ever, I’m happy with this. How long until Episode VIII?

Final Rating (4.5/5) Captures everything about Star Wars that the original film gave audiences. Fantastic characters, light on the story.