Youth is not wasted on these young people: Young Justice Season 1

So I knew of the reputation of this show after it had gone off the air. Like another short-lived animated show, The Spectacular Spider-Man, Young Justice ended before it could truly begin. The first season had been on Netflix streaming for a while and I had it in my list. I finally started it a couple weeks ago. Before I finished the first season, I ordered the second and last season from Amazon. I didn’t want to wait for Netflix to get the second season. I had to have it ready for when this viewing was finished. This is one of the most gripping and character driven series, live action or animated I have ever seen. There is so much here. I hope I can explain it all. 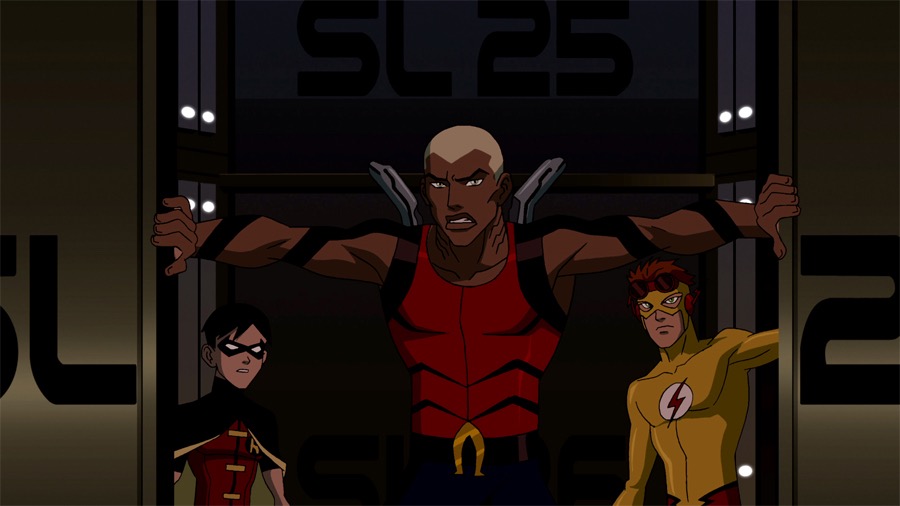 The action begins when Aqualad (Kaldur’ahm), Robin (Dick Grayson) and Kid Flash (Wally West) tire of just being sidekicks and long for more responsibility alongside the veteran Justice League. Right there we already have outer first bit of character depth. Teenagers who want more responsibilities. Something almost all of us can relate to at one point in our lives. Their mission leads them to underground chambers of Cadmus Labs where they come upon a clone of Superman who soon after joins the team as Superboy. The team gets 2 additional members in Miss Martian, the niece of Martian Manhunter and Artemis, an archer who may or may not be related to  Green Arrow. Black Canary trains them, Batman assigns the missions and Red Tornado acts as their guardian for their headquarters.

First let me say the animation is brilliant. Crisp and easy on the eyes. It has a visual style that is fitting of the DC Animated Universe. There is a darker color tone, but the characters are bright and stand out.

It’s quite difficult to pick out a favorite character from this series when every single one of them is handled so well. Each one has something they are going through over the course of the season. Robin has desires to be leader of the team, but isn’t ready yet in addition to becoming more like Batman. Aqualad, who is leader ponders what life would be like if he never left Atlantis while keeping the team in line. Miss Martian struggles with the team learning about her true identity. Superboy has anger issues stemming from a rejection of his generic father Superman. Kid Flash has a great moment where he felt he could have changed the outcome of something if he was just a bit faster. Artemis fears rejection from the team in regards to her heritage and is insecure about her role as team archer, particularly when Red Arrow comes into the picture. There is so much going on that you wonder as a viewer how they balance it all, but handled well it is. Oh yea and they spend the season dealing with the possibility that there is a mole on the team which makes for some great spy drama as well.

I can’t praise this series enough. Fantastic animation, amazing characters and an awesome superhero atmosphere make this a totally engaging show. If you have Netflix streaming, season one is up now. I do however think that this is a show that money won’t be wasted on. I purchased season 2, but will be going back and getting season 1 to own the series. This is worth having in your collection.

Stay Tuned for my feelings on season 2 once I complete viewing.

One response to “Youth is not wasted on these young people: Young Justice Season 1”